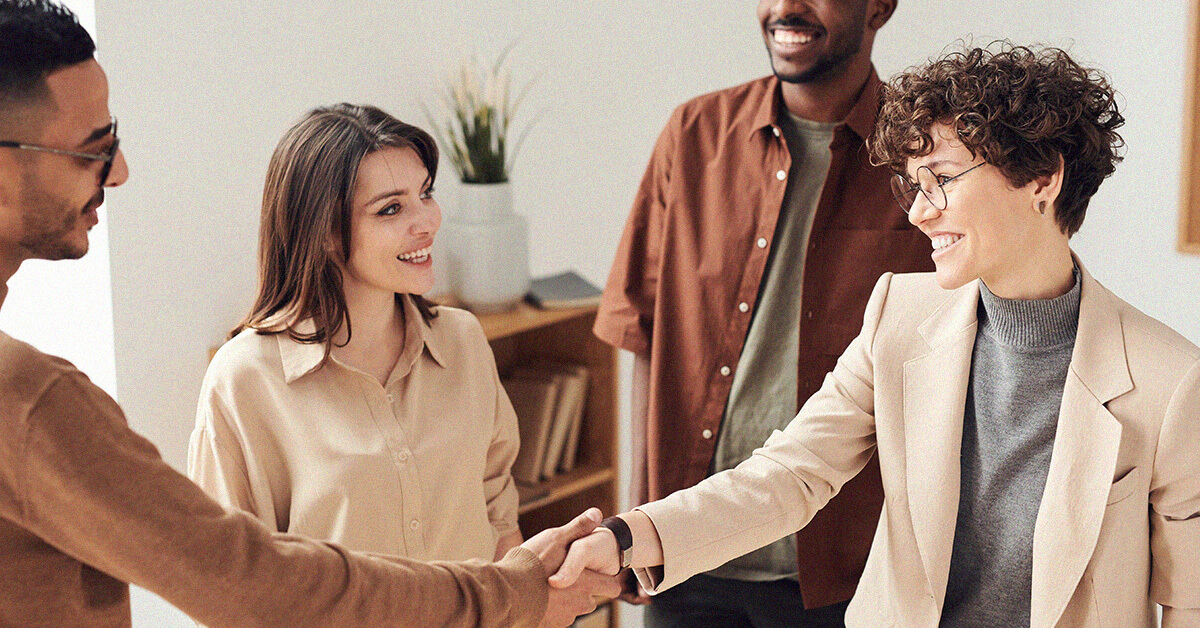 Have you ever heard the saying “You only get one chance to make a first impression”? It’s a snappy maxim common to the world of business, and, according to new research, one that actually holds water.

A study conducted by Dollar Shave Club suggests people form an opinion in as little as 27 seconds. That’s less time than it takes to cross the street. More importantly, the same study also found that 69 per cent of participants made up their minds about someone before they even had a chance to speak.

With this in mind, we thought it was important to explore how to impress interviewers and networking professionals. So here are five ways to make a great first impression.

Smiling is often thought of as socially learned behaviour. However, smiling is actually innate, with congenitally blind children and even primates smiling to express feelings of amusement and joy. This is why smiling is such an important social cue and can mean the difference between endearing yourself to a potential employer or coming across as sullen.

Smiling when you’re feeling stressed can be difficult, but it’s worth it if you want to be remembered. Yes, smiling genuinely makes you more memorable. A study conducted at the University of Florence showed that socially positive signals like smiling made it easier for people to remember who you are. So the next time you're at a networking event or group interview, remember to bare your pearly whites. It will help you create a lasting impression that could benefit you in the future.

Non-verbal cues are a large part of how we communicate and play a crucial role in the success of our relationships. The digital age has meant we spend less time communicating face to face and observing body language in person. And this has led many people to shy away from important social cues like eye contact, a huge no-no when meeting someone new.

Eye contact sends all the right signals: it shows interest in what other people are saying, demonstrates self-belief and can make the person you’re talking to feel emotionally connected. Here are some useful tips for making eye contact when talking to a crowd or chatting 1-2-1:

Group – When delivering a presentation or speaking to a group, be mindful of maintaining eye contact with just one person. Doing this will make everyone else feel ignored. Instead, it’s best to catch the gaze of one person at a time. This will engage your audience and make everyone feel involved.

Individual – It can make others feel uncomfortable if you hold their gaze for too long. To effectively maintain eye contact with someone, make sure you’re looking straight into their eyes, blinking normally, and reacting to what they say.

The handshake is an important part of business etiquette. Believed to have originated from Ancient Greece, it’s been around for thousands of years and therefore carries a great deal of cultural baggage. People aren’t so worried about giving a firm handshake nowadays. However, that doesn’t mean it’s something people don’t notice or something a prospective employer won’t examine when considering you for a position.

When going for an interview, your best option is to temper your handshake. This will ensure your grip isn’t too firm or too weak. If you’re unsure about how much pressure to use, ask a friend to shake your hand. Their feedback will help you gauge how tightly you should grip someone’s hand and address any issues before an important meeting.

You’re probably aware of the power stance. It’s been around for some time and has been used by everyone from nervous politicians to stage-stomping female powerhouses like Beyonce. Many people naively think assuming a power stance will make them look more confident. However, standing legs akimbo in a professional setting is far more likely to make you look contrived than convey a sense of authority.

When meeting someone new, you’re much better off striking a balance between positioning yourself confidently and using open-posture techniques.

Open postures are designed to make those around you feel at ease. Positioning your torso towards the person you’re addressing, arms at your sides, will make them feel like you’re actively listening to what they have to say. Combining an open posture with a confident stance (e.g, head up, shoulders back) is a good middle ground and will help you appear confident without coming across too domineering.

As you say goodbye, it’s likely you’ve already made a firm impression on those you’ve met. But that doesn’t mean you can’t continue to make a good impression.

Business cards are still very popular and are used by professionals around the world. Offering a business card in some parts of the world can be more complicated than others. For example, in Japan, there are specific rules about how many hands you should use and the direction your card should be facing. But that doesn’t mean it needs to be difficult. Generally, the main rule is not appearing too keen. This is because offering your card at the drop of a hat can make you look too eager. What you want to do is come across like your contact details are valuable and only offer them to those who ask.

James Murray is a professional copywriter and researcher at Affinity. He has written for a number of well-known brands, and his professional work covers topics from conservation and cyber security to the science of sleep.